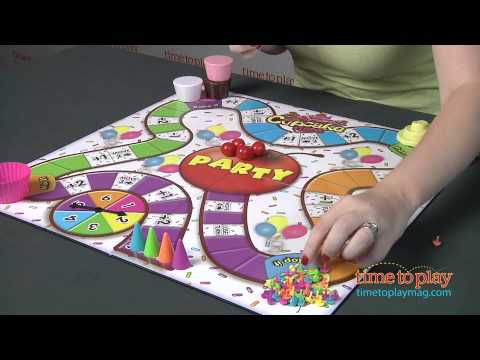 See the full review at

If you land on a blank space, nothing happens and your turn is complete.

Other spaces include Move Back, which tell you how many spaces you must move your pawn backward on the game board, and Lose a Turn.

Players must stop on each cupcake corner, but you don’t need to land by exact spin. When you land on the Mix It corner, you pretend to mix your cupcake batter and choose a cupcake wrapper. When you land on the Bake It corner, you choose a cupcake and put it in the wrapper, then pretend the cupcake is going to bake. The Frost It corner is where you choose a frosting top to place on the cupcake. When you land on Top It, spin the spinner twice to receive two sprinkles, one of each color the spinner lands on. Add those sprinkles and any you’ve collected throughout the game to your frosting top. The last step is to land in the Party cherry space. Once you’ve completed your cupcake and land on the Party cherry, top the cupcake with a cherry, and you’ve won the cupcake race. All other players may then top their cupcakes or continue playing until they reach the party.

There is an optional way to play for older players. To win, you must collect a sprinkle for each color on the spinner. So when you reach the Top It corner, spin twice to collect two sprinkles, then remain in that corner until you have a sprinkle of each color.

Cupcake Race is for two to four players.