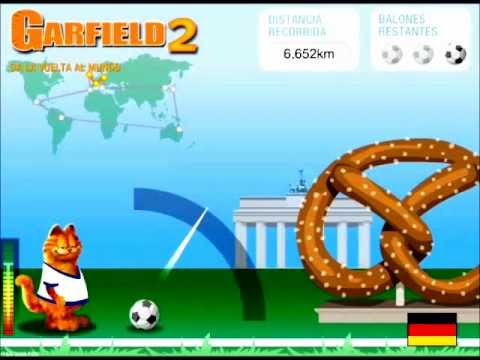 Football, or as it is commonly known in North America, Soccer, is the world’s most popular game, bringing people of different nationalities together, and that’s exactly what you are going to experience in Garfield-Football. Contrary to his usual lazy self, Garfield has decided to go on a little trip around the world. The problem however is that they won’t let Garfield in a country unless he shows them what he is capable of in terms of kicking soccer balls. You will also find helpers along the way who will use their unique skills to give you a hand and shoot the ball even further. The controls in Garfield Football themselves consist of simply the left mouse button. As Garfield stands left of the ball, you will be tasked with choosing the proper angle and force with which to kick it. In other words, once you have the controls down, it’s all up to your reflexes and math knowledge as the force bar moves back and forth quite fast. The goal is to kick it as far as you can and hopefully make it all around the world.
Play the game online here: